The day to love the smell of vinyl in the morning 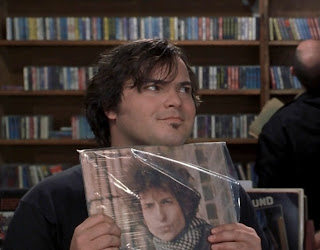 For a place of such rich reward, visiting a record shop as a teenager was an experience of some intimidation.

Because there, behind the counter, would be the coolest individual in the neighbourhood. And he knew it.

For a start, he spent his day in a record shop, playing whatever music he wanted to. Bliss. Secondly, he got his hands on the best new stuff through connections with record company promoters. And thirdly, because he had the power to look down his nose at anyone who came in asking for anything even remotely uncool.

This might sound too much like Barry in High Fidelity but such was Nick Hornby's sharp observation (and Jack Black's borderline sociopath portrayal in the film adaptation) that almost anyone of a certain age will be familiar with both the shop and its employee.

Mine was MJM Records in New Malden. It is here that my record collection commenced, first with the album Songs From Chigley & Trumpton and The Laughing Gnome by you-know-who (and you'll have to accept that I was but a babe-in-arms when these were purchased), and later, with the benefit of disposable personal income, Reggatta de Blanc by The Police. Clearly no one would deny that owning records is a matter of taste.

When I got a Saturday job in my local branch of Boots, I was delighted to find it was literally across the road from MJM. That meant lunchtimes, most weeks, pouring through its record racks - under the glare of Intimidatingly Cool Bloke - to see what singles had just come in, and discover EPs with extra live tracks and back catalogue LPs to fill out my burgeoning library (which then only occupied a black vinyl carrying case, rather than the furniture-requiring array things became).

The record shop is - or perhaps was - a rite of passage, and it's no surprise that icons of music itself hold the experience of trawling racks of 12-inch cardboard sleeves in search of a hidden gem in such treasure. Wistful, perhaps, but in this era of iTunes and the painfully obvious disappearance of shops selling any form of physical media, they are memories of endless happiness. 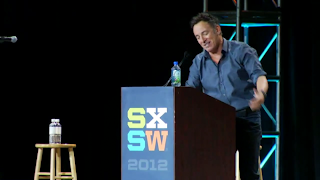 "The Meet The Beatles album cover, those four head shots — I remember, I seen 'em at J. J. Newberry's," recalled Bruce Springsteen during his incredible keynote at SXSW a few weeks ago.

"It was the first thing I saw when, you ran down to the five-and-ten cent store," Springsteen continued. "There were no record stores. There weren't enough records, I don't think, in those days. There was, like, a little set, by the toys where they sold a few albums. And I remember running in and seeing that album cover with those four headshots. It was like the silent gods of Olympus. Your future was just sort of staring you in the face."

Today, Saturday 21st April, is Record Store Day, a concept created in 2007 by a group of Americans to celebrate the hundreds of independent record shops that survive today. It's a day for anyone who draws pleasure from the search, who happily loses themselves for a couple of hours on a Saturday afternoon in the hope of finding something new, something different or something long-lost.

It's also a day for the owners of these shops themselves to celebrate a retailing culture which, even if populated by the likes of Barry and Intimidatingly Cool Bloke, has a unique place in so many people's lives.

"After 28 years as proprietor of an independent record store and weathering all the industry changes," says Tom Kohn, owner of Bop Shop Records in Rochester, New York, "I firmly believe the future of the music industry lies in the hands of the independents. We push the envelope by taking chances on and promoting lesser-known artists, and are passionate in our support and beliefs."

"The independent record store," adds Kohn, "is a place where folks can gather and connect around a common interest, and in that respect, bears little difference from the quintessential social networking sites - the old book and record stores of the 50s and 60s."

Record Store Day is an admirable effort to celebrate an experience shared by so many of us, but as CD sales continue to fall off a cliff, and digital downloads take over as the predominant means of acquiring music, there is a danger of it turning into an enthusiasts' adventure, a Campaign For Real Ale for vinylholics.


Last year, UK CD album sales fell by 12.3 million and there are fears that British high streets will soon be bereft of any major record stores, such as the dwindling HMV chain, echoing the disappearance of chains like Tower Records in America.

There's no doubt that downloading is a convenient alternative, but at risk of sounding like a dreadfully old head, it does completely lack any degree of emotional satisfaction in the act of purchase, even if the end result - the music itself - is.

More worrying is the effect on independent music that the decline of physical music formats is having. Just because CD sales are being replaced by downloads doesn't mean things are any better for the artist. 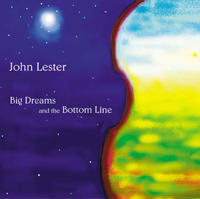 New York-based singer-songwriter John Lester agrees: "As an independent artist the CD remains a good source of income when I play on the road. CD sales have accounted for half of my income, the rest being performance fees."

"However," says Lester, "as CD sales drop because people 'can' download my songs, the income from downloads is falling far short from that of CDs. Often, if people don't buy a CD or two after the excitement of a live show, the moment is lost and they often don't get around to downloading later."

So, the message is - support your local record shop if you love music. And if you're looking for a rarity, you never know what you might find, if you can get past the intimidating glare of the impossibly cool bloke behind the counter.

Details of the 2012 Record Store Day can be found at recordstoreday.com.

Simon Poulter
Bitten by the writing bug as a teenager, I began my career while still at school, writing live reviews for the NME. On leaving school I joined a short-lived lifestyle magazine called LM as a staff writer before going on to write for Smash Hits, Record Mirror, Sounds, The Mail On Sunday, Teletext and the Press Association. In 1995 I moved into the PR world, working for Philips for the better part of 16 years, and then Alcatel-Lucent and Nokia, living in the Netherlands, California and France in the process. Today, I'm back in London, proudly working in corporate communications at Vodafone, and enjoying a new life as a partner and step-dad.